Day 1 Journey to the Permian Shelf/Basin and Beyond Our first day of this journey was primarily a day of travel and coordination. I, along with my sedimentary petrology classmates and Dr. Bogdan Onac of University of South Florida, departed Tampa International Airport by our airlines of choosing to rendezvous in El Paso, Tx. The purpose of this field trip was to explore and investigate the geology of remanants of the ancient Permian Sea in Texas and New Mexico. However, we also explored other adjacent geologically important rift zones and salt basins. Since the majority of the day was our travel to Washington Ranch where we would be camped for the duration of the trip, I would like to take this opportunity to give you a brief overview of the geologic history and composition of the areas we traveled to. Coming from the relatively flat landscape of Florida, we were immediately placed in a much more tectonically affected area once arriving in El Paso.

After we made our way past the El Paso city limits we began heading toward the southern end of the Hueco Mountains and along the Hueco Bolson to the Diablo Platform (graben). At the base of the Hueco Mountains we made our first stop of the trip to investigate the bedding layers visible in the mountains around us (mile 24.9). These formations were composed of primarily Magdalena Formation (Carboniferous limestone/dolomite) at the base with a small cap of Permian Formation. The bedding layers had a tilt to them which helped indicate the presence of tectonic activity. This area is a part of the Basin and Range Province (a large series of horst and grabens) which I will talk about repeatedly across the duration of our field trip. The basin and range system consists of highly active tectonics that are largely accounted for by (1) the large rift zone of the Rio Grande Rift (expansion and faulting), (2) the Pedernal Uplift (anticline fold axis) which caused the increased uplift of the Diablo platform, (3) and the normal faulting occurring at the Salt Basin/Guadalupe Mountains fault zone. On our route to Camp Washington we traveled through all of these different geomorphologies. We traversed across the Diablo Platform, passed through the Salt Basin (graben), and then began our ascent of the Guadalupe Mountains (horst). Here are a few images that help to visualize this activity. 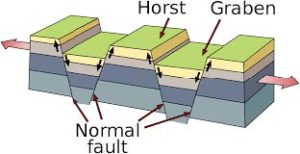 Example of the tectonics involved at the basin and range system provided by Dr. Onac. 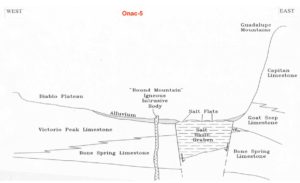 Cross-section of the route traveled from El Paso to the Guadalupe Mountains provided Dr. Onac helps to visualize the tectonics and geology occurring along the route.

While finally approaching the Guadalupe mountains the change in geologic landscape was quite noticeable as we left the Diablo Platform and entered the Salt Basin. The Salt Basin would be our first, but not last, introduction to the Delaware Basin along our trip. And so, we made our second stop to get out and inspect what we were seeing in the sediments and topography/geology of the land surface in the area. The white color sediments and rocks (evaporites) and secondary mud crack formations were a clear indicator that we entered our first location that showed evaporite processes. 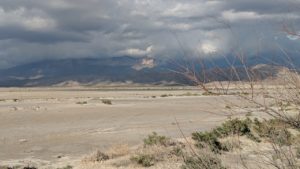 The Salt Basin Graben with the Guadalupe Mountains (horst) in the background. 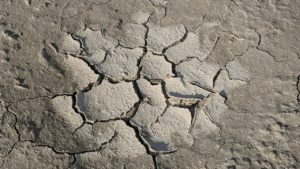 Mud cracks found at the surface is a secondary formation caused by the wetting and drying of the sediments. These features are a good indicator of which way is up on of bedded areas that may have been tectonically altered.

After our stop at the Salt Basin, we made our final stop of the day before reaching camp at the El Capitan overlook. This was our first introduction into the Guadalupe Mountains and would provide our first view of the upper Permian Shelf and Basin (from a distance). Here are a few images to clarify. 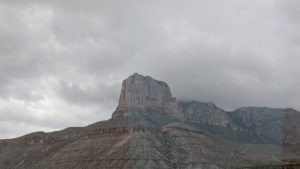 El Capitan from the overlook. It was a little overcast that day. This is part of the Capitan Reef Formation which will be discussed in detail.

Since it was overcast, and raining sporadically, we decided to go ahead and travel the rest of the way through the Guadalupe Mountains to Camp Washington near Carlsbad. After a long day of travel, I was excited to get out and situated in preparation for our explorations that laid ahead. 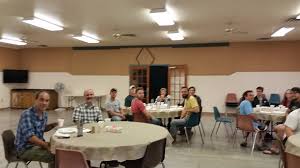 Dr. Onac and my classmates at dinner once arriving to the ranch.