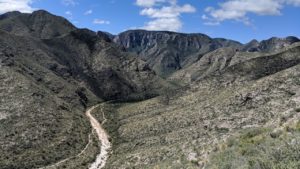 Our second day brought us to Guadalupe National Park to hike (my favorite hobby) the Permian Trail. This hike begins at McKkitrick Canyon and ascends up the Guadalupe Mountains towards Capitan Reef. The trail has a series of marked points along your way which allow you to see many of the major geologic features viewable in the canyon. Since I am going to give you a brief description of each stop along the way, I would like to first give you a general overview of the area before talking about our ascent up the trail.

The trail journeys through multiple carbonate environments and formations as we make our ascent up. From the base of the trailhead you can observe 4 distinct formations. Each formation represents a different carbonate environment. The Tensill and Yates formations represent the backreef and forereef environment. These two formations are located at the highest elevations(backreef), behind the Capitan Reef, as well as just below the reef at lower elevations along the shelf slope(forereef). The Captain Reef is the main upper unit. The lowest of the unit of the shelf is the 7 Rivers Formation. When you are siting at the trailhead you are standing on what is the Cherry, Brushy, and Bell Canyon formations we observe on the following days’ travels to the roadcuts and outcrops.  The Permian Geology Trail allows you to traverse up the Permian Shelf from the Delaware Basin to the Capitan Reef enabling you to see the different compositional strata layers and also to observe the difference in deep time environmental evidence as well. The shelf itself was formed around the same time as the overlying reef (Gaudalupian), however, the shelf contains many siliciclastic differences that the overlying reef doesn’t contain. These are due to the differences in depositional environments. Here are a few images to clarify the area.

Here is a good visual of the stratigraphy we were walking through along the trail     Imagecredit:http://www.sepmstrata.org/CMS_Images/Permian%20Geology/Figure13NWShelf.jpg

Stop1: The first stop on the trail exhibited oligomictic conglomerates that were intraformational and had calcareous cement. They were Quaternary in age and formed by the percolation of water from the McKkitrick Canyon waterflow.

Stop 2: There was a compostional change at this location. These formations were darker colored wackestones. Some areas had chert inclusion. You were able to observe fossils with silica replacement in many rocks. Bedding was well uniformed. This wackestone is part of the Bell Canyon Formation. Other structures visible in some of the bedding layers were stillolites and organism boreholes (bioturbation).

Stop 3: Bedding layers and rocks showed higher skeletal and non-skeltal grain clast composition. Looked to be a packestone that most likely formed because of turbidity currents. Based this origin on the differing compostion of some clasts visible. 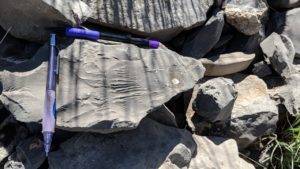 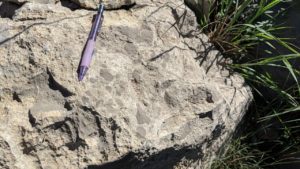 Intraclastic limestone formed by the introduction of clasts of different limestone compositions.  Result of turbidity currents. The darker colored clasts differ in composition from the surrounding clast. 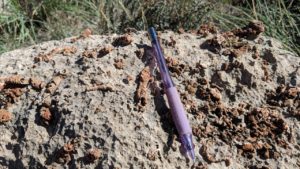 Silicified crinoids were more resistant to weathering than the surrounding carbonate rock. 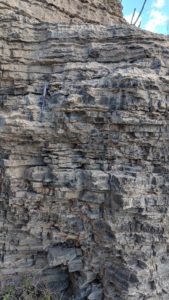 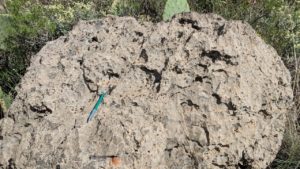 Bioturbation has caused the bedding layers to be indistinguishable.

Stop 5: This stop exhibited a large eroded and weathered column of wackestone with two distinct layers. The top layer was highly weathered an bioturbated whereas the bottom section was less weathered and bioturbated. In addition, there was evidence of dissolution in the rocks and re-precipitation of the calcite after the weathering had occurred. In the distance, across the canyon, we were better able to observe the large bedding formations. 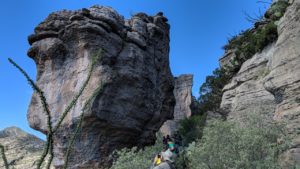 Karrens visible in this feature. The upper segment of this pinnacle was a highly weathered and bioturbated wackestone where the bedding layers were hard to discern. The lower section was a far less weathered and less bioturbated wackestone with noticeable thin bedding layers. The structure showed signs of dissolution and weathering where calcite had re-precipitated as a result.

The bedding formations visible from stop 5 on the trail from across McKkitrick Canyon. Image credit: https://www.nps.gov/parkhistory/online_books/gumo/1993_26/images/fig16.jpg

Stop 6: Exhibited a high concentration of skeletal grains in between some bedding layers. The differing composition was again a result of higher flow turbidity currents.

Example of how the skeletal composition of the bed layering was in the rock.

Stop 7:  At this stop we were able to observe a compositional transition as we were leaving the slope towards the forereef. There was an observable difference between the lower and higher bedding profiles. The lower profile contained thin bedding planes with less skeletal grains whereas the upper profile didn’t exhibit any layering. In additionn the upper layer had larger clasts (intraclast packstone). 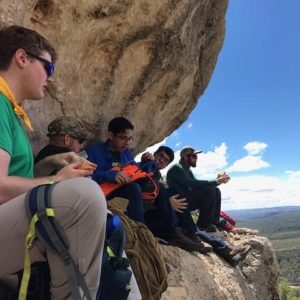 Our beautiful view at lunch.

Stop11:  There was a non-uniform mixture of clasts as the slope due to turbidity currents. Some secondary calcite precipitation visible. Most rocks were packstones with both skeletal grains and intraclasts. Grains were well rounded (grapestones). Fossils present were algae, sponges, and corals. 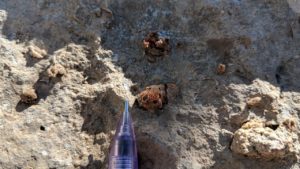 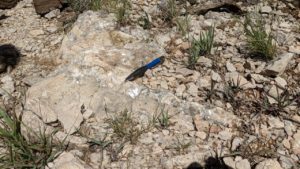 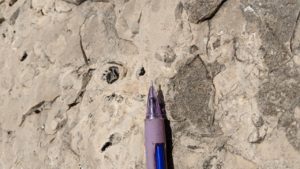 Mixture of sponges, algae and some corals.

Stop 12:  There was no bedding visible. Observed a large bioconstruction boulder that was held together by sponges, algae and other fossils. The boulder had fallen from the reef down into the forereef and slope area. 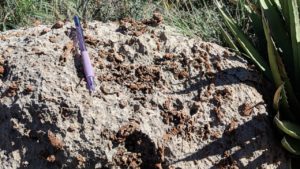 Biocunstruction boulder that had transported down from the reef. 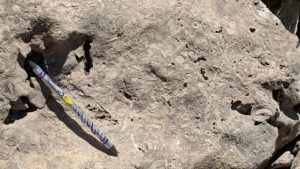 Stop 14:  Exhibited horizontally cut fusilinids. This limestone formation had formed along the slope. 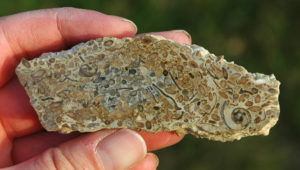 Point 15:  This was the final point that we made it to and it marked the beginning of the reef formation. Many fossil varieties were present. Algea, sponges, brachiopods, and ammonites all were observed. This is where the Yates formation was about to begin. Unfortunately, time constraints meant that we had to end our hike here to start our descent back to the trailhead ensuring we would reach the camp in time for dinner. 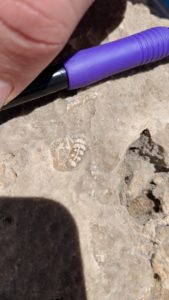 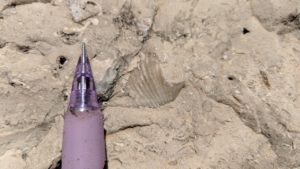 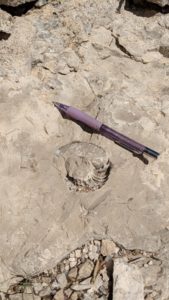 We quickly made our descent and returned to the ranch area. However, first we stopped by the neighboring spring by that ranch which supplied water to much of the area. After we visited the spring we inspected rock formations that were directly behind our bunkhouses at the camp. They lied within a drainage channel that was connected to the springs drainage basin. After inspection we determined these rock structures to be tuffas. Tuffas as we know form around the mouths of spring areas. 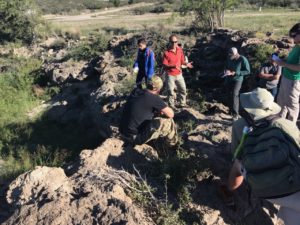 Tuffa we observed located behind our bunkhouses at Camp Washington Ranch.

This was the completion of our second day. After nice hike and day spent in the sun, I was looking forward to the dinner and showers that awaited us.