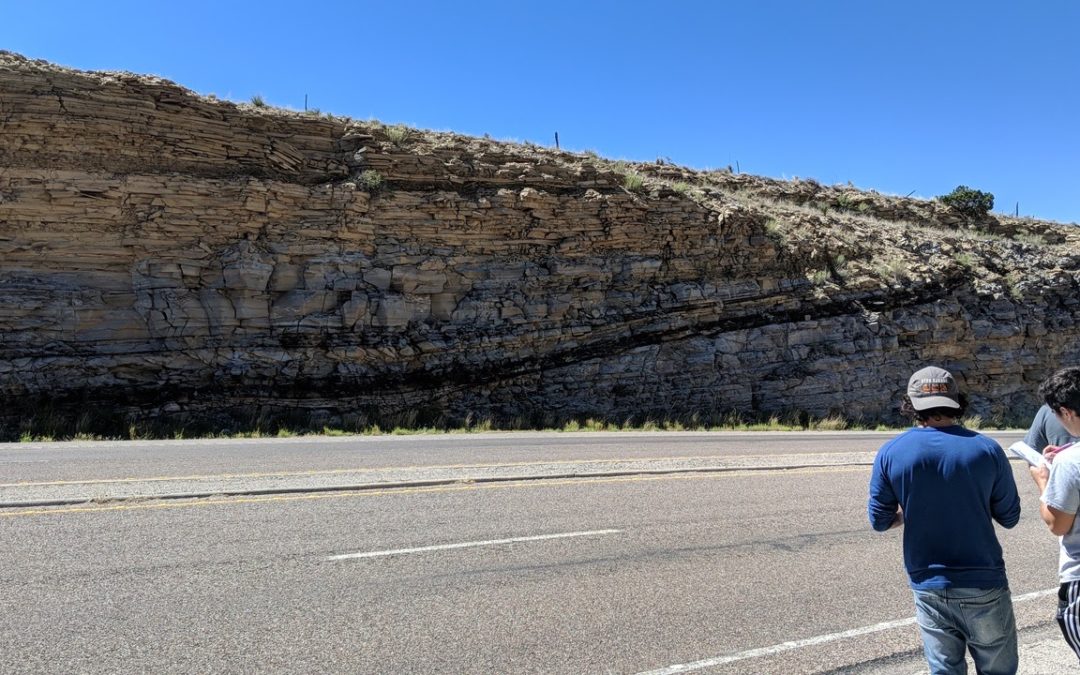 The third day of our trip was spent visiting a variety of different formations that we were able to observe via roadcut outcrops. These roadcuts enabled us to be able to see a more detailed look at some of the formations we haven’t been able to view because they were always below the surface. Throughout the day we noticed that there was a high fluctuation in the compositions and variety of rock types from one roadcut to another. This was because these formations that occurred near the basin/slope interface or within the slope itself. This suggested that weren’t only carbonate formations, but also siliciclastic sandstone and shale formations. This was due to having undergone several (7 major) sea level fluctuations which allowed for the introduction and transportation of siliciclastic sediments to be deposited into the formation through large turbidity currents and underwater landslides. The majority of these road cuts were a part of the Delaware Mountain Group and are Guadalupian in age. We unfortunately weren’t able to arrange the stops in any progressive order to represent a natural progression through the vertical extent of a cross section of the Permian Basin area. So, I will post the stratigraphy of the basin area that I have already posted in a previous post for you to be able to reference as we move from roadcut to roadcut. I will do my best to be as clear as possible when discussing these but the order in which we observed them was very mixed so hopefully you can follow along. 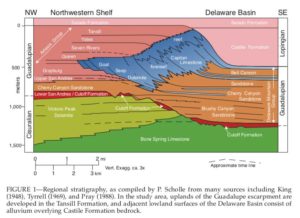 This was not actually a roadcut stop but was a return to viewpoint of the south tip of the Guadalupe Mountains. This was the best location to be able to view the reef, forereef, and basin all in one sight. 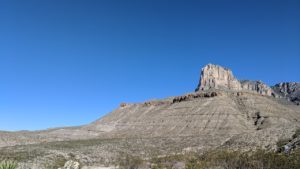 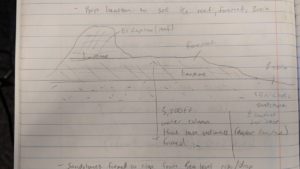 Rough sketch of the geology from the viewpoint.

The most important thing to note from what we viewed was the fact that the overlying formations viewed were the limestone formation of the reef and forereef and the lower formations were siliciclastic. The origin of the siliciclastic sediments in the basin formations we saw all came from erosional transportation from the North, Northwest, and Northeast during the major sea level change events.

Our first roadcut brought us to these thin bedded basin limestones. The bedding layers were fine grained micritic deposits lacking skeletal grains and had primarily a mud composition. They were dark in color which denoted a high organic content and were derived from gravitational suspension. There was evidence of some undulated beds (small folds) in which allowed for secondary calcite veins to form in the fracture voids. At 35 Ma years this formation is older than the reef. We weren’t able to find any, but it is possible to find Pyrite due to the high Fe content of the sediments.

The Brushy Canyon outcrop had two different distinct strata. The upper unit was thick bedded brown sandstone layers which overlaid thin bedded shale and sandstone layers that were darker in color due to their higher organic content. There was some noticeable post-depositional undulations in the lower bedding units that suggest post depositional tectonic activity. On the right side of the outcrop the lower bedding abruptly ends due to channel filling resulting from erosional processes and channel filling. These strata represent the Lower Guadalupian Formation and formed at the same time the Capitan Reef was flourishing. 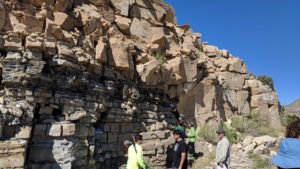 Right side of the Brushy Canyon outcrop where you can see the result of channel filling. 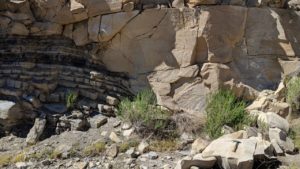 Note the thin dark shale layers that alternate with the sandstone layers in the bottom unit. These indicate a short high organic event followed by a change in climate to allow for the shale to form. The shale forms from an  environment that promotes anoxic conditions.

This sequence was a representative of channel and basin deposits. The alternating layers we observed were much thicker than the previous section of Brushy Canyon. This meant the environment was more stable for a longer period of time during their deposition. However, they still followed a repeated and alternating pattern representing major climate change events. 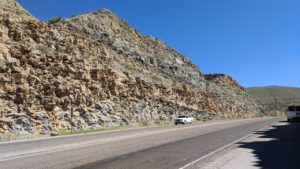 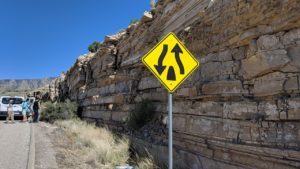 This outcrop was the only outcrop where we got to observe a fault mirror. Although these bedding layers were similar in composition to other areas of the Cherry Canyon Formation, there was distinct fault line with different bedding orientations to the left and right sides of the fault. The very outer left/right portion of the outcrop had bedding layer dipping at roughly 30 degrees whereas the central part of the outcrop near the fault line had bedding dipping at nearly 50 degrees. The fault gouge had created a fault mirror at the point of the fault. 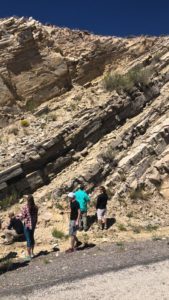 Tilted layers at left side of the outcrop and fault.

Rough sketch of the outcrop.

This outcrop was broken up into two different compositional areas. The first section that we looked at was the Frijoles site. The Frijoles site contained Quaternary aged conglomerates formed by the deposition of fan deposits during high energy/short term events. These conglomerates were what capped the Cherry Canyon sediments. Pictured below was farther down the outcrop where the actual boundary between the Cherry Canyon Formation (upper) and Brushy Canyon Formation (lower) occurred. Paleomagnetic studies have confirmed these two formations are separated by a small bed of black shale whose deposition occurred as a result of an anoxic event.

The Bell Canyon Formation is the uppermost sandstone formation you can observe as you continue into the basin. It contained large lense-like portions of carbonates that are known to be huge fragments of the Lamar Limestone (reef formation).These large fragments had been transported by submarine landslides onto previously deposited siliciclastic sediments. Some areas of the outcrop also contained Radar units within it. The top cap of the outcrop was tightly layered siliciclastic sediments. 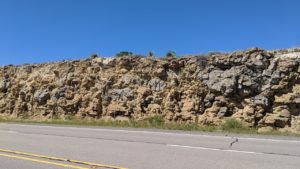 The grey portions of the outcrop are the result of submarine landslides of the Lamar Formation (limestone/dolomite).

This stop was our introduction into the Castille Formation. This formation is composed of basinal evaporites. The outcrop was primarily composed of tightly layered bands of gypsum/anhydrite and halite (white to light grey in color) with intermittent laminae of dark brown colored gypsum. Considering these rocks are evaporites, for them to follow this type of formation it would suggest that the area had undergone a cycle of (1) drying through the initial evaporite process which precipitates calcite first, then gypsum, then halite; (2) wetting from some type of short lived event which reintroduced enough water to start the precipitate cycle over again while also introducing some organics (within the dark colored laminae of calcite); (3) drying after the rain event had ceased; (4) while drying the precipitation sequence began again (5) Compaction that forced the water out of the gypsum and altered it to anhydrite. Considering the high volume of layers, you can determine that this cyclic event happened over and over again across a long period of time. This Castille Formation is up to 1500 feet thick in areas so you can imagine the length of time this evaporation process has been occurring. 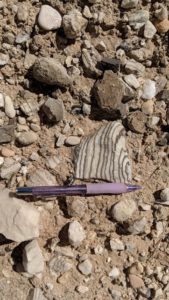 This specimen had fallen from the outcrop but shows the evaporite precipitation sequence as described in the text. The dark colored laminae are the calcite layers separating the gypsum/anhydrite-halite sequence. 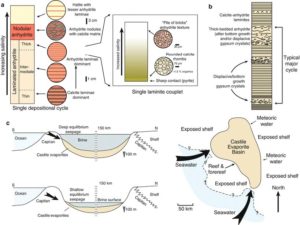 This stop was still part of the Castille formation, however, it had a great representation of the enterolithic and chicken-wire gypsum structures. These structure formed due to the re-precipitation of the anhydrite after the evaporite layers had undergone compaction turning the which turned the gypsum into anhydrite (lower thin layers). There was a distinct 6-foot-thick segment of layers that had folding occurring which suggested there was active tectonics after deposition. As you moved vertical down the outcrop from north to south the bedding layers progressively got thinner. This would be due to the compaction and re-precipitation that was occurring. 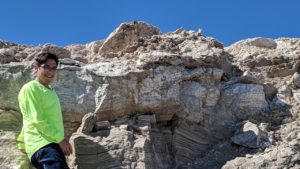 Note the lower laminae that represent the basic evaporite precipitation sequence (although the gypsum has been altered into anhydrite due to compaction) that is overlain by the chicken-wire and enterolithic anhydrite structures (lack of laminae). 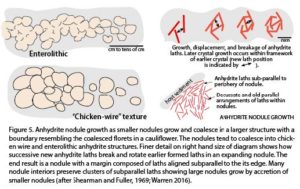 Our stop at the Selenite mine was a very cool opportunity to be able to sift through mine tailings and rock hound for selenite specimens to bring home. This was the only opportunity we had to see selenite (variety of gypsum) in the field during the trip. In addition, the sheer amount of the size of some of the sheets and columns of gypsum they had at the mine were very pleasing to see. The habit of the selenite was blocky to platy with some of the sheets being upwards of 2-3 cubic feet. 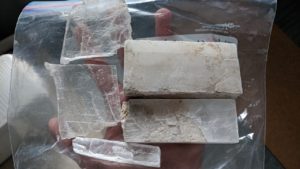 My selenite crystals from the Crystalline Phoenix Mine, TX.