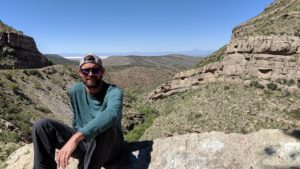 Our trip to White Sands National Monument was mostly for enjoyment. However, once we arrived there is a great deal of geologic differences we saw in the geomorphology and tectonics of the basin area where White Sands formed in comparison to the Delaware Basin we have seen for a majority of the trip. White Sands National Monument is located in the Rio Grande Rift Zone we talked about on our first day of the trip. On our dive from El Paso to Camp Washington we drove through the southernmost area of this same rift zone heading towards the Guadalupe Mountains. On our route to White Sands we arrived into this rift zone much farther north coming through the Sacramento Mountains on the eastside.

View form the Rio Grande Overlook in the Sacramento Mountains. White Sands is visible directly behind my head.

This rift area is a product of the western plate under the eastern plate. White Sands sits on what is the Tularosa basin (graben) in-between the Sacramento and San Andreas Mountains. Unlike the open basin areas we have seen through most of the trip, the Tularosa basin is a closed basin system meaning there is none to very little outside seawater input into the basin because the basin has always been closed in by mountains. Therefore, all the water responsible for the precipitation of the most of the evaporites found in the basin are a result of the capture of rainfall by the area and surrounding mountains into the basin system. The evaporites found here are Permian in age and originate from the Yeso Formation (lagoon environment). However, the White Sands formation is much younger in age. Convergent tectonics were responsible for uplifting the gypsum deposits which allowed for winds from the southwest to transport the gypsum from the San Andreas Mountains to where they currently are now. Needless to say. These deposits are unique and quite a site to witness and explore. 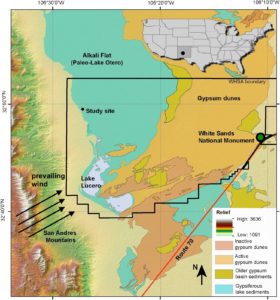 Helpful diagram of the basinal graben area where White Sands Notional Monument is located and helps explain the origin of the gypsum dunes. 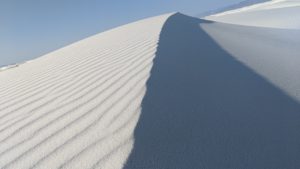 These beautiful gypsum dunes were easily 30-40 feet in elevation from the troughs, however, the total thickness of the gypsum beds is 300-400ft. 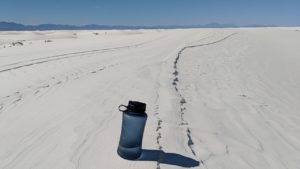 You can see the effects of wind action on the gypsum deposits as the secondary structure (ripples) are visible in most areas. The ripples allow you to determine the wind direction based on their formation.

These vast dunes span a total of 140 square miles. 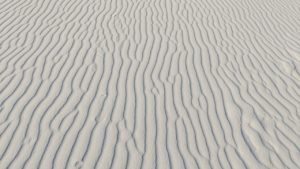 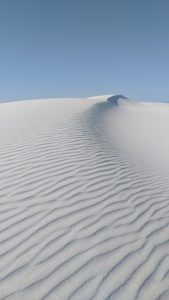 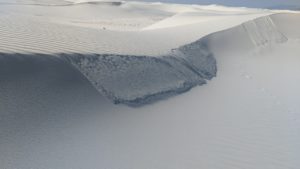 Some dunes exhibited small landslide type features that occurred after re-deposition of the gypsum by the wind. These crests were overloaded with sediments causing the gypsum sand to cascade down the slope and form these structures.