Our final day of field examinations brought us to Carlsbad Caverns National Park. Many believe Carlsbad Caverns to the most beautiful publically accessable cave system in the world. There are over 50 km of different cavern routes in this majestic site and the cave itself is over 1000 feet deep. The majority of the Carlsbad Caverns cave system was formed in the Capitan Reef Formation. Although there are many different carbonate formations within the cave itself, most of the Carlsbad Caverns are dolomitic in composition. The system was not formed primarily by dissolution like many caves. The caves at Carlsbad are a result of a process known as speleogenisis. This occurs when lateral or subterranean waterflows containing hydrogen sulfide interact with oxygenated rain water that has percolated through the limestone formation. Once these two water chemistries combine it allows for oxidation to occur and sulfuric acid occurs as a result. This sulfuric acid is more corrosive than the carbonic acid that forms most caves allowing for the formation of the vast rooms that you will see in just a short while. Speleogenisis began forming the voids in the Capitan Reef limestone roughly 60 Ma years ago and ceased its processes about 3 Ma years ago. These reactions first occurred closer to the surface when global water levels were much higher. Over time, as global water levels receded, the elevation of the interaction surface also receded eventually allowing for the formation of these caverns that are over one thousand feet deep. The most recent formations in the cave are the speleothem formations everyone enjoys to witnessing today. The overall formation of these caverns is very complex. However, there are wonderful descriptive examples provided by the NPS here: https://www.nps.gov/cave/learn/nature/upload/cave_development.pdf

Although most of the cave is part of the Capitan Reef Formation, the cave entrance is part of the Yates and Tensile formation (backreef). The composition of this formation is noticeably different at the surface than once you get below land surface and into the cave. Additionally, there are features visible that you would only find in surficial carbonate environments such as teepees and pisolites.

Teepee structure that has occurred near the cave entrance (Yates and Tensile Formation). Occur due to intertidal water flow.

Bat Amphitheater at the cave entrance. Every evening thousands of bats fly out of the caves to seek out food. It’s supposed to be quite a sight to behold.

The winding walkway down into the cave entrance.

As soon as you start making your way down into the cave you immediately start to smell the musky, damp smell of millions of years of geologic history and bat excrement. As you venture further down into the dark caverns (a headlamp is required shortly after going beneath the surface) you immediately start to see the signs of jointing and dissolution. These joints couple with the sulfuric acid formed during the intermingling of the two water sources dissolved away large voids that at the time of formation were still submerged underwater. As time passed, and the water level receded, the voids were no longer filled with water and eventually the roof of the void collapsed due to the newly formed lack of structural support. These collapses are the biggest contributor to the expansive rooms that are found in the caverns. Furthermore, it is in these large voids that formed that allowed for the formation of the many other carbonate and evaporite formations found within the caves.

A good visual of the cave development process supplied by NPS.

The most common and beautiful formations that we witnessed while exploring the caves were the many varieties of speleothems. Speleothems are calcite formations that are a result of calcium bicarbonate containing groundwater seeping into the cave voids exposing the solution to air. This causes it to off gas and precipitate calcite. There were many of these amazing speleothems to witness throughout the cave.

A calcite drapery hanging from the cave ceiling.

Eventually these structures can connect all the way down to the cave floor, or vice versa, to form a column.

As we continued deeper into the cave the less you see these large speleothems formations. This is because the deepest parts of the caves are the youngest cave areas and have been exposed to air the least amount of time. therefore, they have had the least amount of time to precipitate calcite. Heading towards the deeper parts of the cave are some large gypsum deposits that up to 15 feet thick in some areas. How these deposits have formed is still a question be asked by scientist considering that gypsum is easily dissolved in the prescence of water. There are few areas of the publically explorable part of the cave that still have large amounts of pooled or flowing water, but you can witness them in small scale at some areas. In these areas you at times may find cave pearls. Although, I didn’t observe any myself.

A small flow of pooled water that shows there is still activity in some areas of the cave.

Along the journey down to the base of cave you can occasionally find different fossils which are helpful indicators to tell you the age of the rock formations that are around you. I unfortunately couldn’t find any good specimens myself. After the two-mile journey down to the bottom of the cave we took the easy ride back and hopped on the elevator for a quick journey to the surface. After grabbing some lunch, we hopped back into the vans to return back to the ranch. However, along the way we made a couple stops to take a closer look at the Yates and Tensill Formations (backreef) that are visible from the land surface. In addition, we observed part of the Capitan Reef (forereef) formation also as we traveled back through Walnut Canyon towards Carlsbad. Added to the teepee formations that were visible before we entered the cave, our stops examining the Tensill and Yates formation allowed us to see some pisolites and some siliciclastic formations that are evidence of it being an intertidal formation. That is the environment in which those structures and rocks are formed. In addition, there were also some rocks that were siliciclastic in nature and were the remnants of the eroded inland deposits. Those deposits had then been transported to the area and re-deposited before undergoing digenesis and forming the new siliciclastic rocks. 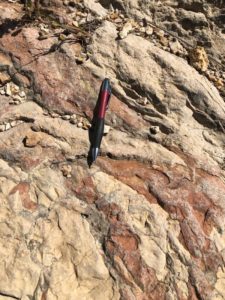 Reddish color is from oxidation of siliciclastic sediments contain iron. 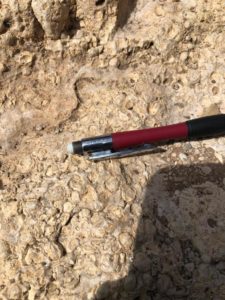 As we continued our travel back towards Carlsbad we were making a steady descent. This eventually took us back out of the Tensill and Yates Formations into the Capitan Reef formations once again. However, the composition of the Walnut Canyon outcrop we stopped just outside of the park entrance was no longer the same limestone/dolostone we saw in the subsurface. At our final stop of the Walnut canyon area we we able to witness a much wider range of fossils present in what looked to be primarily boundstone. There was a large amount of secondary formations (fractures with secondary calcareous fill) in the formation. These formations are known as neptunian dikes.

An small ammonite fossil recession found in the top of a rock formation with additional algae and bi-valves surrounding found at the Capitan Reef boundstone at Walnut Canyon. 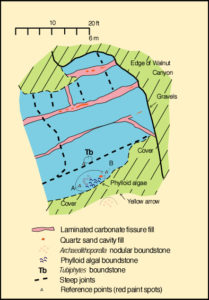 This figure provided by Dr. Bogdan Onac shows the Capitan Reef framework that we observed at the final stop in Walnut Canyon.

For our final stop of the day we departed the canyon and returned to the Delaware Basin area once again near our ranch to explore a gypsum cave located in the salt flats of the Delaware Basin. Unlike the Carlsbad Caverns, this cave was composed of primarily gypsum that had be carve out completely by dissolution from rainfall penetrating through the thick gypsum layers and carving though the layers. While exploring the cave it was very easy to see the foliations in the thick gypsum layers that represented the different compositions of water that underwent evaporation to form these layers over millions of years. The basin area at one point in time was completely submerged underwater and as sea level changes occurred and tectonics altered the area it eventually became the vast dried sea bed that it currently is. 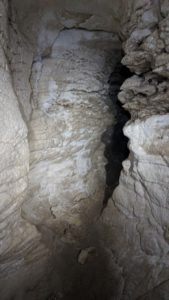 Inside the gypsum cave. The angularity of the fractures and joints allow you to identify the direction of waterflow.

Unfortunately, the visit to this smaller cave was the last of our explorations. Even though the trip was an amazing journey through deep time, I was happy to see it end so I could return to Tampa and catch up on the rest of my studies. All good things come to an end. Or is this just the beginning? I believe it is. The journey is always continuous. Until then!